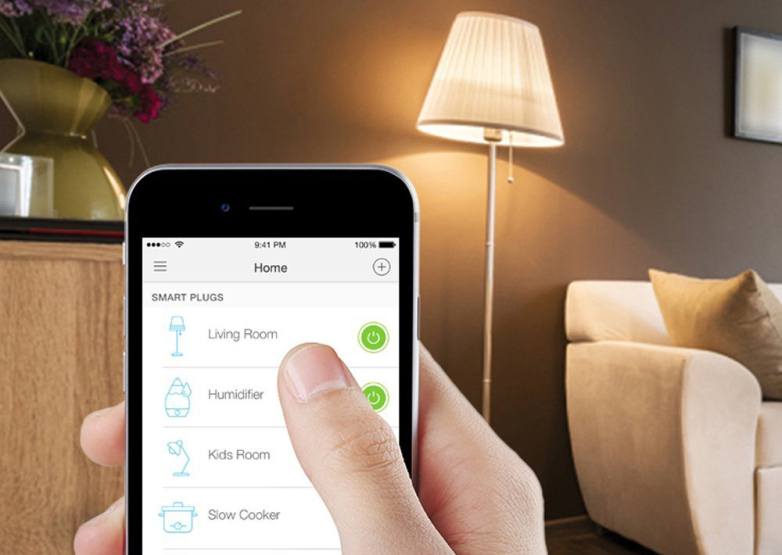 The modern level of technology development allows a person not only to create various multifunctional devices, but also to remotely control them. And we are not talking about some primitive remote controls, working at a relatively short distance from the desired object, but about gadgets that provide full control over the equipment at a distance of thousands of kilometers. For example, through the Internet you can turn on or off the desired device in the house, while on vacation in another country. Such tricks are performed with the help of such a device as a smart plug socket. It is also able to perform a number of other useful actions: to control the distribution of energy, automatically shut down the electrical appliances in case of their malfunction or voltage drop in the network, to function as a fire alarm and much more.

How to Choose The Best Smart Plugs?

When choosing a smart plug, first of all, you should consider the following points:

In this ranking, we collected the most interesting options for 10 best smart plugs presented on AliExpress. Products were selected based on the following criteria: 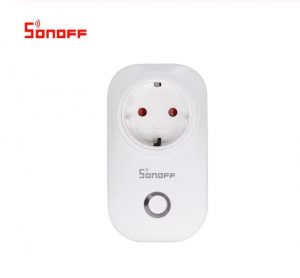 Smart plug socket from Sonoff should be classified as basic gadgets of this segment. That is, it is perfectly suited for the first acquaintance with the new-fashioned smart technology and home use, but to trust some serious task to this device (a failure to perform which will have material consequences) – not a very good solution. And, most likely, the maximum supported power of 2000 Watts for such grandiose purposes simply will not suffice. The equipment is controlled by a special application on your eWeLink smartphone. The proposed functionality is the most basic: on and off at the touch of a button on your smartphone, timer and scheduling. The simplest example of use – connect to an electric kettle or coffee machine (socket is configured to start the equipment in the morning at a certain time of day, and by the time the owner wakes up, everything will be ready). The collection of statistics on energy consumption at least in real time is not provided. 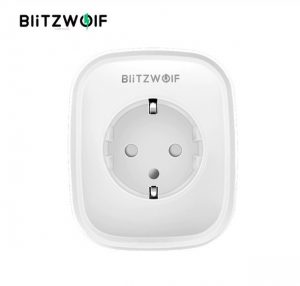 In general, a classic plug socket with a prefix Smart. It knows exactly what a smart outlet should be able to do (it responds to user commands in the application both in direct access mode and within the specified scenarios, plus it collects statistics on power consumption) and unfortunately can't boast of anything else interesting. Although here the questions are more about the application (Smart Life) than the plug socket, and it is likely that in future updates the number of functions will expand significantly. As for the advantages of the device itself, it is necessary to note a very good quality of the build.

What is the smart device rating without Xiaomi's technology? This segment of the Chinese giant fills the Xiaomi Mijia plug sockets, compatible with their own Mi Home system. The gadget itself is a classic patch socket-transformer, installed on conventional 220V power connectors and allows you to control the power supply to the device. The design of Xiaomi Mijia is minimalistic – the body of white plastic with just one button and LED.

Direct control is provided by the application for smartphones Mi Home. Through it, the socket can be turned on/off, the timer and schedule can be set (specific time on specific days of the week), and it can also be added to custom Mi Home scenarios (e.g. programmed to start Xiaomi Mijia when the front door is opened and thus shut down when it is closed). In addition, the gadget works perfectly with Amazon Alexa and Google Home, and within the mentioned ecosystems supports voice control (Alexa and Google). Among the disadvantages, we note the lack of monitoring of energy consumption, but this functionality is planned to implement in future versions. 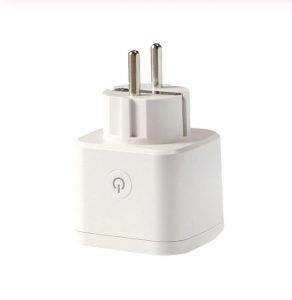 The analogue of the previously considered socket from Xiaomi, focused primarily on the use within the system of smart home from Google and the Smart Life application from the company Tuya. In fact, the characteristics of both outlets are very similar: here you have an identical maximum current of 16A, and similar functionality with remote control through a smartphone (power on / off, timer, voice control, etc.), and full compatibility with a smart home from Yandex.

However, outlets from Rehentronix are more compact and, unlike Xiaomi, are able to control and monitor power consumption (both current values and collecting statistics for periods), which predetermined their higher place in our ranking. 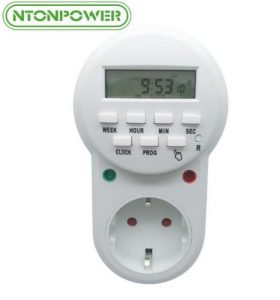 For those who for some reason do not want to mess with the Wi-Fi connection or do not have such a possibility, there are alternative options, such as a plug socket with a timer from NTONPOWER. On the gadget there is a small screen and seven rubberized buttons – with their help the device adjusts to the mode of work necessary for the user (time is set up to seconds). The enclosed instruction is in English, so there will be no problems with the adjustment (there are many detailed explanations of the principles of the socket on the same YouTube). ETG-63A will perfectly suit for connection to a boiler or an air conditioner, i.e. for devices which work is important only at certain intervals of time. But judging by the reviews, the most popular timer in aquariums – it is programmable to turn on and off the light on schedule. 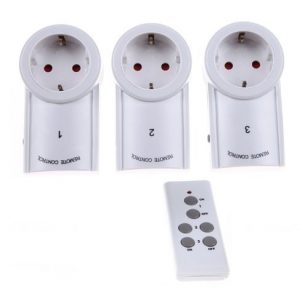 The easiest by design gadget in this rating. The set includes three sockets and a special remote control to control them. No more functions (application on your smartphone, timer, etc.) are not provided. According to customer feedback, ALLOYSEED Switch Socket copes with its task, but since the range of its capabilities is not very large, it is desirable to determine even before the purchase of the device for what purpose it is necessary (so as not to complain about uselessness). Popular applications are country houses and country houses, where machinery and equipment are often located in hard-to-reach places (inconvenient for constant manual switching). The gadget has a good reception radius, working at long distances and able to pass through several walls. Please note that the battery for the remote control is not included, and since it is not the most common standard, you may have problems finding it in stores. 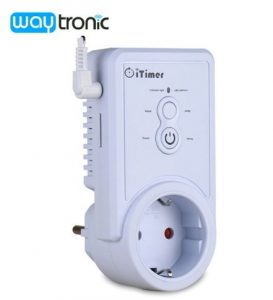 Waytronic iTimer, as well as the previous device in the rating, works on the control from the phone through the inserted sim card. However, the list of functions for this model is much wider. Different sms commands can set the timer on the switch, create a schedule and much more. Their full list is in the instructions, so when buying it will be useful to inform the seller that you need a manual in English (otherwise it will not be difficult to find it on the Internet). The kit also comes with a temperature sensor, which opens up a rich range of options for setting up home appliances. For example, you can program the air conditioner to turn on at temperatures above 30 degrees and, accordingly, turn off at 25 and below. Among other things, there is a USB port on the plug socket.

THE BEST SMART PLUGS IN OTHER FORMATS 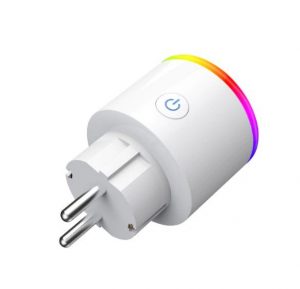 Another classic smart plug with Wi-Fi, with all the ensuing functions and features. It offers user control through the application, full remote access (you can switch the socket on and off at any time), a wide range of settings (creating schedules, calculating statistics on power and consumption), smart plug compatible with Amazon Alexa and Google Home voice commands, etc. The declared power of 16A and 3840 Watts is enough not only for mobile gadgets, but also for much more solid household appliances.

However, the main advantage and feature of this particular model should be called the presence of RGB-lighting (set up also through the application). Due to it it is convenient to use the plug socket as a kind of a night light (judging by responses, many people do it exactly). 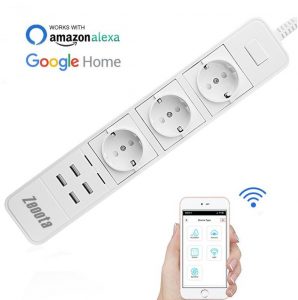 The PS022 is not just a smart plug socket, but a whole technological complex consisting of three standard AC plugs and 4 USB ports at once. Each of the European outputs is completely independent and can be individually programmed and controlled through an appropriate application – in this regard, the device differs favorably from, for example, a smart extension cord brand Xiaomi, which, having similar functionality, does not allow you to command the plug sockets separately. It can be configured quite simply, supports Amazon Alexa and Google Home voice control and the creation of separate working modes and scenarios. 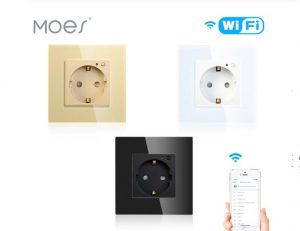 As a rule, most users buy “smart plugs” without any specific purpose, and, so to speak, for the sake of interest and in order to personally try out new technologies. And if the first experience was positive, then sooner or later there will be a question about improving the whole system of outlets in the house for the smart ones. One of the main obstacles to upgrade is the format of such devices, namely their overhead nature. They look not very aesthetically pleasing and do not fit into every interior, and if a couple of such outlets can still be tolerated, then something more to decide on is much harder.

And here to help comes the production of the German company MOES, which is a full-fledged wall outlet, outwardly indistinguishable from the usual. The device is available in three colors, supports voice control, is compatible with the Smart Life application and has all the necessary functions of remote control.

5 Best Soldering Irons for Electronics on Aliexpress [in 2022]

5 Best Electric Scooters on Aliexpress [for 2022]

ABOUT US
We create interesting collections of things and ratings of the best products. We take into account the cost, technical characteristics, popularity, reliability, availability, quality, user reviews and other indicators.
Contact us: info@getdvice.com
FOLLOW US
© GetDvice - All rights reserved